Million-year-old fossils indicate that some of the world’s earliest humans lived in Tanzania. At the Olduvai Gorge located between the Ngorongoro Crater and the Serengeti, fossils and relics of early humans and prehistoric animals have been unearthed. These include Australopithecus boisei (Nutcracker Man) and Homo habilis (Handy Man), fossilized human remains discovered with stone tools nearby, which are some of the earliest remains of humans ever found. For this reason Tanzania is often dubbed the Cradle of Mankind.

Little else is known of the people who populated the region until the Masai, a fierce warrior people, moved in from the north and claimed what is now northern Tanzania. The area was colonized by Germany in the 1880s and then fell under the control of the British in the aftermath of World War I. The British, who ruled the area as a League of Nations protectorate, never expected to stay long and, consequently, did little to improve the country’s infrastructure. That set the stage for later difficulties. Tanganyika, the part of the nation on the African mainland, was granted independence in 1961, followed by the island/nation of Zanzibar two years later. In 1964, the two countries merged as the United Republic of Tanzania (a combination of the two names).

Tanzania began independence with high hopes. Julius Nyerere, called Mwalimu (Swahili for “teacher”), became the first president. His idealistic development program was based on an African third way, neither capitalist nor communist. Its goals included decent health care, the establishment of a national language (important in a nation of 130 ethnic groups), increasing international prestige and universal literacy. He improved health conditions somewhat and expanded the usage of one language, (English, taught in all secondary schools and universities) but his economic policies were far less successful. A declining economy, a bloated and corruption-ridden bureaucracy, the inability to feed a growing population and the failure of one-party democracy have all combined to drag the country deeper into poverty. A war with Uganda—Tanzania won, but it bankrupted itself to do so—and trade disputes with Kenya only made matters worse. In addition, nature has not been kind to Tanzania. Most of the population is engaged in agriculture, yet the countryside is mainly made up of dry, infertile highland plateaus. There has been no agricultural surplus for urban areas or for export abroad.

After Nyerere’s resignation in 1985, his successor, Ali Hassan Mwinyi, reduced the government’s control over the economy, a move intended to attract foreign investment and loans. Benjamin Mkapa, who was elected president in 1995 in the country’s first multiparty elections, intensified those efforts. He has worked with the World Bank and IMF to implement economic reforms and secure financial aid and debt relief. He has also been involved in strengthening regional links with neighboring Kenya and Uganda, and the East Africa Regional Parliament and Court of Justice were opened in Arusha in 2001. However, Mkapa has also come under some criticism. In 2001, he caused controversy when he banned opposition rallies. Thirty-one people were killed, and hundreds arrested on Zanzibar by troops during demonstrations. Then in 2002, he spent US$21 million on a presidential jet. On a bright note for the economy, Tanzania is now the world’s third-biggest gold producer, thanks to the Bulyanhula Goldmine which opened near Mwanza in 2001. 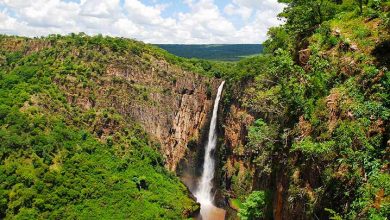