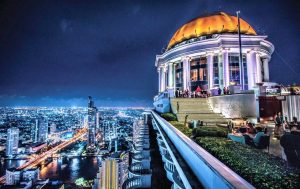 Bangkok, Thailand, July 7, 2020 / TRAVELINDEX / by Mewati Sitaram – Charity begins at home and it is the motto of Lebua Group. On 3rd July, 2020, when the hotel announced its reopening post lockdown, it got completely sold out within no time. There was a phenomenal response from the guests. All four restaurants were completely booked in advance. The Lebua Dome has four globally acclaimed restaurants namely Mezzaluna, Chef’s Table, Sirocco and Breeze. The opening day set protocol was followed with enhanced safety and sanitation, along with the thoughtful and guest first service standards.

As the guest enjoyed the sumptuous meal, they were pleasantly surprised when the bill was presented. Instead of bill, the guests were requested to pay what they deemed fit for their meal, as the hotel would donate the entire earning of the evening to the charities in Thailand.

Deepak Ohri, CEO of Lebua hotels and Resorts says “It was truly emotional to see that none of our patrons who came to dine with us paid less than the standard menu prices, but in fact they paid 30 percent more. Many of them were moved to tears by the intended gesture and promised to be back soon again, with some of them rebooking again to dine with us in the coming days”

Keeping the sombre mood in mind and to thank the Almighty, for the team who has stayed united together through this crisis. The Lebua management decided that all proceeds of the opening night be donated to 5 locally selected charities.

Ohri added “On 3rd July our food had a divine aroma—so precious, its price was beyond comparison. For our patrons, chose not to care for the bill but for our five chosen charities. They paid as they wished—with boundless love and generosity. And that, dear friends, is priceless! It was indeed heartening that all the restaurants were booked to full capacity on the opening night which overwhelmed and humbled the team leading to increased self-belief”.

Ohri further added “We were truly blessed by the rain God’s as the skies opened up in the evening. The downpour did not dampen anyone’s spirits- whether it was our guests or our teams… In fact it was an evening of positivity and blessings as we look forward to happy times again! Many guests sat under the umbrella and stayed till last to enjoy the downpour of the day”.

Who would’ve ever imagined that our very own Indian hotelier Deepak Ohri could have created the The World’s First Vertical Destination epitomizing luxury at the Lebua that too in Bangkok. Interestingly, Hudson’s Yard built at a cost of USD 28 billion dollars in New York City is the World’s Second Vertical Destination!!

It may be noted that when the Zodiac Grill Restaurant at Iconic Taj Mahal hotel was opened in Mumbai in 1989, for the first one month no bills were presented to guests. The guests were told by the chefs and service associates that we have put our heart and soul into preparing these dishes, you can pay as per your wish. And, surprisingly, all the guests paid much more than it’s pricing. The Zodiac Grill was a unique concept introduced in Mumbai which was going house full for a long period right from its inception day. There were no walk-in guests but booked through telephone. This information was shared to Mumbai Messenger Newspaper by then Culinary Director, Celebrity Grand Master Chef Satish Arora.

It must be noted that the Lebua group has decided to retain its staff throughout the crisis, and this move of them is well appreciated across the globe.